The Iowa State Men’s Golf Team finished 12th out of 16 teams at The Prestige which was held at PGA West on the Greg Norman course.  The tournament features six teams currently rated in the top-30 of the Golfstat national rankings.

Iowa State was led by Nick who finished tied for 23rd on plus 2.  He shot a second round 66 which is a season low and the 19th sub 70 round of his career.

The Prestige is arguably the best event we play in the regular season. Not only does the event attract the most competitive field each year but also the teams all stay at the La Quinta resort. The place is unbelievable – so good it looks fake.

The guys were coming off a pretty nice week of preparation back home, I was feeling like my game was starting to piece together nicely so I was pretty excited to get out there and compete.

At some of our events, there is a college-am (same format as a pro-am) where certain players get asked to play alongside the sponsors of the tournament. This week I got paired with a Major League Baseball (MLB) player – Shane Peterson.  He is a short stop for the Milwaukee Brewers who play in the best baseball league in America – it was a great experience to play alongside him.

I was very happy to post the season low 66, it was one of those rounds where things started clicking; not only did I hit it close but I also made the putts!  The other two scores were a little off my best and I admit that my emotions got the better of me in that last round.  I played with the world number one amateur, Jon Rahm, in the opening round and I was certainly impressed with the state of his game – he finished the tournament in third place.

I know that my game is very close to clicking! Something special is on the horizon. 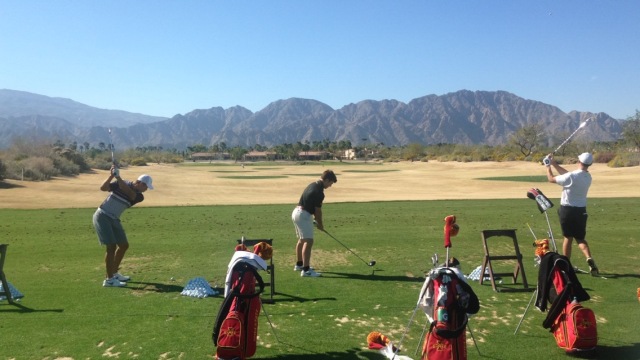 The newest course at PGA WEST and the only Greg Norman-designed golf course in the Coachella Valley is aptly described as being very “challenging but fair.” Sporting only 68 acres of lush manicured turf, 102 white crushed marble bunkers and shark blue water coming into play on 9 holes, this 7,200-yard course offers a truly “Outback” experience that will entice you back time and time again.

Resting in a prehistoric ocean bed 40-feet below sea level and surrounded by an immense crescent of terra cotta mountains, the course teems with purple, white and yellow wildflowers, while the mix of tall and short native grasses produce different shades of green running almost to silver. The grass covers just 60 acres of tight fairways that taper toward the greens with nine ponds blanketing 18 acres. The demands of this target-style course are a challenge for players of all levels.

This blog was originally set up to share our 9 month adventure around Europe and the USA with friends and family in 2014. On returning to NZ in January 2015 I decided to carry it on so I could continue to share any future travel adventures - it has become my electronic travel diary. I hope you enjoy and get inspired to visit some of the wonderful places we have visited.
View all posts by SUNGRL →
This entry was posted in California, United States of America and tagged cyclones, iowastate, nickvokegolf. Bookmark the permalink.