The Iowa State men’s golf team did it again!  They won their second straight tournament on the 2nd of April at the Thunderbird Invitational held on the Karsten Golf Course in Arizona.  The beat the thirteenth ranked California University team by one shot as well as the twenty second ranked San Diego State University team and the fifth ranked Arizona State University team who were playing on their home course.  Iowa State’s three round tally of 832 is the second lowest in school history.

Nick came runner up shooting three rounds in the sixties – 68, 68, 65.  This total of 201 broke the school’s 54 hole record.  This result is his fifth top ten finish this season and he is currently averaging 68.0 strokes in his last six rounds.  Nick’s fellow Kiwi teammate, Denzel Ieremia placed sixth and Ruben Sondjaja placed eleventh. 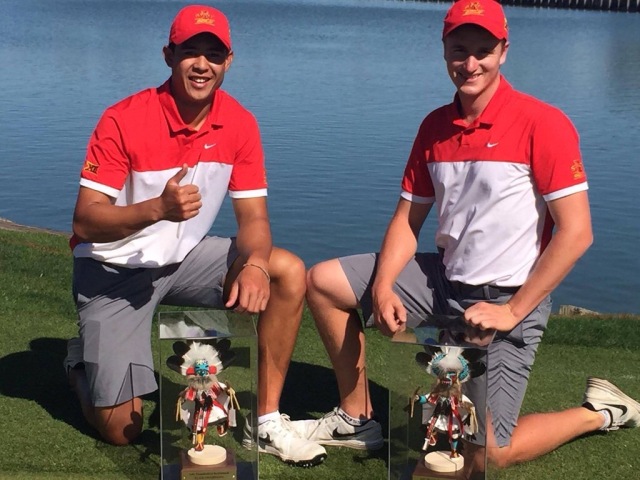 Jon Rahm of Arizona State University (ASU) – currently the number-one ranked amateur in the world – took home individual honors for the third straight year, shooting 66, 64, 68 for a 54 hole total of 198.  Rahm is the only ASU player to win the ASU Thunderbird Invitational three times, and with his ninth collegiate win, Rahm now moves into second place in all-time victories at ASU behind only Phil Mickelson with 16.

The Thunderbirds were founded in 1937 with the mission of promoting the Valley of the Sun through sports.  Consisting of 55 “active” members and more than 250 “life” members, The Thunderbirds host the Waste Management Phoenix Open; the best attended golf tournament in the world, which to date has raised more than USD100 million for Valley charities, including The First Tee of Phoenix.  With its unmatched fan participation and rich history dating back more than 80 years, the Waste Management Phoenix Open has gained legendary status for being a unique stop on the PGA TOUR.

This blog was originally set up to share our 9 month adventure around Europe and the USA with friends and family in 2014. On returning to NZ in January 2015 I decided to carry it on so I could continue to share any future travel adventures - it has become my electronic travel diary. I hope you enjoy and get inspired to visit some of the wonderful places we have visited.
View all posts by SUNGRL →
This entry was posted in Arizona, United States of America and tagged cyclones, iowastate. nickvokegolf. Bookmark the permalink.