On the 18th July, Nick played in the US Amateur Qualifier at the Fremont Golf Club in Nebraska.  This tournament was played over 36 holes and Nick took medalist honours and more importantly secured the only qualifying spot for the US Amateur Championships which are to be held from the 15th to the 21st August in Michigan. 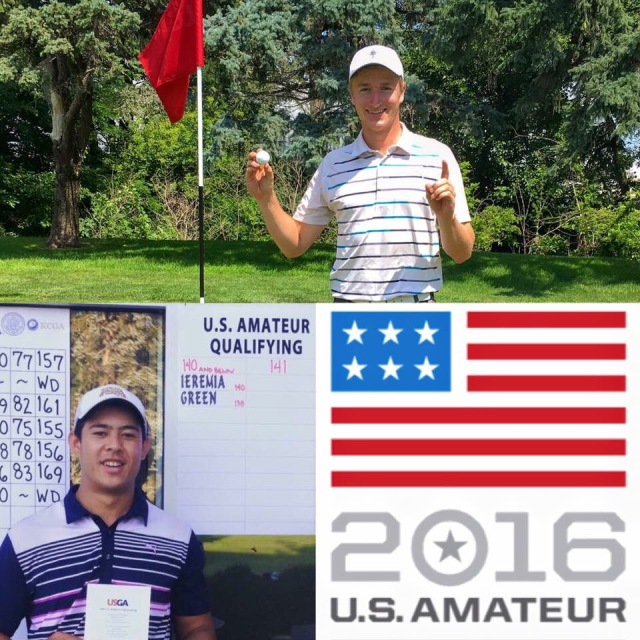 Fremont – Nick Voke, an Iowa State golfer, earned medalist honors and the lone qualifying spot, at Sectional Qualifying for the 2016 U.S. Amateur Championship at Fremont Golf Club on Monday.
Voke had quite the day, after making birdies on three of the last four holes on the front nine in the morning, he stepped up to the par-3 10th hole. Voke struck a 9-iron right at the flagstick and it rolled in for a hole-in-one to get him to 4-under on the day. He added another birdie for a 5-under 66 to lead after the first round. Kearney’s Andy Sajevic and Bellevue’s Jose Vega were two strokes back after each fired a 68 (-3).

Voke cooled off in the afternoon for a bit, playing his first nine holes in even-par, while Sajevic heated up. Sajevic shot a 3-under 32 on the front nine, including an eagle on the par-4 7th hole. He then rolled in a birdie on No. 17 and was the first player in at 7-under 135. Lincoln’s Michael Colgate, a Husker golfer, also shot 32 (-3) on the front nine and closed out his round with birdies on four of his last six holes. Colgate left another birdie putt just a few inches short on No. 18, tying Sajevic at 7-under.

Then Voke came up with some more magic, he birdied five of his last eight holes, including Nos. 17 and 18 to post 9-under 133 after a second round 67 (-4). Voke advances to the 2016 U.S. Amateur Championship at Oakland Hills Country Club in Bloomfield Hills, Michigan on August 15-21.

The Fremont Golf Club can trace its roots back to the first decade of the 1900’s. The Club commissioned noted architect, Tom Bendelow, to build the original 9 holes, which was completed in 1930. The Scottish born Bendelow was one of the more prolific architects in the first third of the twentieth century. He is best known for his design of Medinah Country Club no. 2, which he built in 1926. This course has been the site of U.S. Opens as well as PGA Championships.

In 1960 or 1961, the original clubhouse burned. The Club used that fireas an impetus to move the clubhouse and expand the course from 9 holes to 18 holes. The Clubhouse was relocated to Somers Street. Illinois golf architect, David Gill, was hired to expand the course. In fact, Mr. Gill added 11 holes. Seven of the original Bendelow holes remain. The original Bendelow holes are 3,4,5,7,9,15 and 16.

In 1981 the clubhouse was again gutted by fire. The original architect, Gordon Jenkins, of Fremont, designed and supervised the reconstruction of the existing clubhouse.

Over the years, there have been many improvements made to the golf course and clubhouse by Club members. Length has been added, bunker and pond constructed, and new and improved irrigation systems have been added. The course has matured, as has the magnificent collection of trees framing the holes. The Club maintains top-flight course grooming equipment. In 1987, Club leadership worked with noted golf course contractor, Bill Kubly of Landscapes Unlimited in Lincoln, to move the infamous upside down and backwards 12th green, designing a new split-level green located 50 yards behind the original green. Recently the Club has purchased 100 acres north of the existing course. The ownership of this land gives the Club many options for the future. Today, one will find a beautiful, traditional, parkland style golf course. It is known for its narrow, tree-lined fairways and sloping slick greens. The course is challenging for the better player and, at the same time, playable and enjoyable for the average player. The members never tire of playing this beautiful and challenging golf course. Just ask one.

This blog was originally set up to share our 9 month adventure around Europe and the USA with friends and family in 2014. On returning to NZ in January 2015 I decided to carry it on so I could continue to share any future travel adventures - it has become my electronic travel diary. I hope you enjoy and get inspired to visit some of the wonderful places we have visited.
View all posts by SUNGRL →
This entry was posted in Nebraska, United States of America and tagged nickvokegolf. Bookmark the permalink.