Nick played in the 68th Herman Sani Tournament between the 11th and 13th August 2017 at the Echo Valley Country Club.  The Herman Sani is a 54 hole strokeplay tournament open to both professionals and amateurs and there is also a seniors division for over 50’s.  All entrants must be Iowa Golf Association members or have significant ties to Iowa, for example playing or having played college golf in Iowa.

Nick won the tournament with a total of 204 or 9 under.  His Iowa State and NZ team mate, Denzel Ieremia came runner up on 6 under.

Voke, who posted an impressive 66 (-5) in the final round, shot 204 (-9) over the three-day event to win by three over former teammate Denzel Ieremia.

“I struck the ball pretty well all week,” Voke said. “I did a little bit of work before today’s round trying to get the speed of the greens.”

Voke admitted that he didn’t even play a practice round, let alone have any prior experience at EVCC.

“I walked the course before round one,” Voke said. “I had a good game plan and was able to come away with (the win).”

Voke birdied three of the last four holes to pull away. 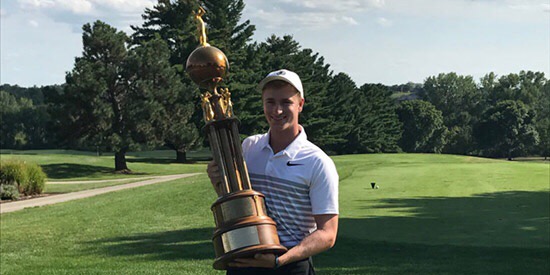 Echo Valley Country Club was founded by two of Des Moines’ most prominent businessmen of the 1960s, E.C. “Eddie” Coppola and Hy Diamond. They shared a dream of providing a first-class country club with an inclusive atmosphere welcoming to any who wished to join. The dream of Echo Valley stood in stark contrast to the exclusionary policies of some area clubs at the time.

The land on which Echo Valley was built had been used by Coppola to raise quarter horses. Edward L. Packard of LaSalle, IL designed the 18 holes which now comprise the Vale and Creek courses and construction began in 1967. The Clubhouse was designed by James Paxon Architects, with interior designer Kenneth Melton providing the very chic interior design, with included orange shag carpets. Don’t worry–the carpet has since been replaced and much of the Clubhouse was redesigned in an extensive 1994 renovation and subsequent 2007 facelift.

In an August 30, 1970 article about the Club’s opening titled “Something for Everyone,” The Des Moines Register observed, “It appears that nothing has been left out in Des Moines’ newest addition to the country club scene, Echo Valley Country Club.” We believe this remains true today. 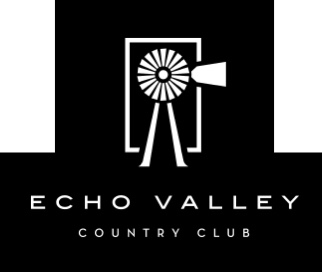 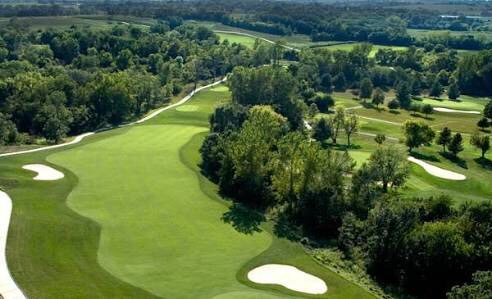 Who was Herman Sani?

Herman Sani, the namesake of an Iowa signature golf tournament, was an early 20th-century businessman who saved Hyperion Field Club from bankruptcy during the Great Depression.

The Coppolas’ contribution, announced this week by Iowa Golf Association director Bill Dickens, creates a new base of strength for the Herman Sani Scholarship Fund, which has been creating opportunities for college-bound Iowans since 1958.

You don’t have to be a golfer to receive one of the fund’s four annual $2,000-a-year grants for up to four years. But many recipients have been, including local pro J.D. Turner, who received the inaugural award in 1958, and PGA player Steve Spray.

Turner was one Golf Digest’s Top 50 Golf Instructors and for many years was the club pro at Des Moines Golf and Country Club. Spray played on the PGA Tour during the 1960s and ’70s. Both early recipients later won the Herman Sani Tournament — Spray in 1972 and Turner in 1974 and 1984.

To appreciate the generosity of brothers Mike, Arthur and Ed Coppola, it helps to know the background of Sani and the tournament that was created at Hyperion to honor him 65 years ago.

Sani became an Iowa golf legend, not because of his athletic skill, but because of the dramatic way in which he saved one of central Iowa’s earliest golf courses and because of his efforts to help young people.

Local golf historian Bill Reed wrote that Sani was born in Italy on July 12, 1884, the son of Eugenio Sani, a schoolteacher who immigrated to Des Moines in 1892.

Young Sani was a newsboy, shined shoes and sold programs at the ballpark, according to Reed. Later, he studied civil engineering and worked for the city street department, eventually becoming the chief inspector.

In 1916, Sani went to work for a paving company that laid a brick road to Camp Dodge during the months leading up to U.S. involvement in World War I. Later, he owned the company.

Sani loved to play golf and was an early member of Hyperion Field Club, which opened its golf course in 1910.

In 1926, he helped plant trees along Hyperion’s fairways. According to Reed, Sani’s engineering background “allowed him to build, rebuild and make golf course improvements all over Iowa.”

Sani was also an early officer of the Iowa Golf Association, serving as secretary-treasurer beginning in 1926.

During the Great Depression, Hyperion fell behind on its property tax payments and in 1936 was to be sold for back taxes, Reed wrote.

“Herman Sani showed up and paid the past due taxes,” the historian wrote. “Then he reportedly tore up the bill on the Polk County Courthouse steps. There was no record of him being reimbursed.”

The tournament that carries his name was created in 1950 and quickly became “one of the cornerstones of Iowa golf,” said IGA’s Dickens. “It’s one of the few with open competition between amateurs and professionals,” he added.

The Sani Tournament was always played at Hyperion until a scheduling problem caused it to move in 2013 to Echo Valley Country Club, which now rotates with Hyperion as host of the event.

The new venue exposed the Coppolas to the Sani history, and the scholarship fund captured their interest. The fund had suffered from a lack of interest, and the IGA launched an endowment drive two years ago.

“The Coppolas’ generosity is a giant step toward fully endowing our scholarships,” Joe Kehoe, president of the IGA Foundation, said in a news release announcing the family’s gift.

This blog was originally set up to share our 9 month adventure around Europe and the USA with friends and family in 2014. On returning to NZ in January 2015 I decided to carry it on so I could continue to share any future travel adventures - it has become my electronic travel diary. I hope you enjoy and get inspired to visit some of the wonderful places we have visited.
View all posts by SUNGRL →
This entry was posted in Iowa, United States of America and tagged hermansani, nickvokegolf. Bookmark the permalink.