Nick played in the Iowa Open which is a professional tournament between the 25th and 27th August 2017.  The 54 hole tournament was played at Blue Top Ridge in Riverside, Iowa.

Nick finished as the top amateur tied for sixth on 9 under.  The winner was Nyasha Mauchaza from Florida who had a total of 14 under for the three rounds.  The next amateur finished on 7 under in tenth place.

My preparation leading into both the Herman Sani and Iowa Open was good.  I knew there was a good chance that they wouldn’t provide us with yardage books so I took the initiative to go and out and make my own.  That worked really well and I was more comfortable in the practice rounds taking my time to map out the greens.

I was really pleased with six solid rounds in professional events and it showed me I am able to post good scores with proper course management and a better understanding of my tendencies under pressure or when things aren’t going according to plan.

I thought my swing was a tad off in the Iowa Open but I didn’t let that put me into my usual downward spiral where I over analyse everything.  My play was solid and I made minimal mistakes – I was rarely short sided and I took my medicine when required and didn’t bite off more than I could chew off the tee.

Nyasha Mauchaza’s first-round 65 probably felt like a good omen at the 84th Iowa Open in Riverside. But thanks to a so-so 70 on Saturday, the Florida native had to replicate that performance Sunday to take home the title.

Mauchaza nearly did just that, carding a 5-under 67 on the final day at the Blue Top Ridge Golf Course to narrowly win the tournament and the $25,000 prize. His 14-under total for the event was followed by Nathan Yankovich, at 13-under, Chase Hanna, at 12-under, Brad Hopfinger, at 11-under, and John Gullberg, at 10-under, which rounds out the top five.

Needless to say, there was little room for error for Mauchaza, who used six third-round birdies to seal the win.

Notable Iowa ties in the open include a couple of amateurs: Former Iowa State golfer Nick Voke finished sixth, at 9-under, while Jeff Swegle, who golfs for Stanford but is from West Des Moines, tied for 11th, at 7-under.

Blue Top Ridge Golf Course is part of the Riverside Casino and Resort in Iowa.  It was designed by golfcourse architect Rees Jones and completed in 2009. 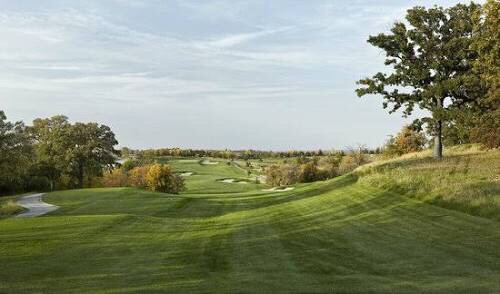 This blog was originally set up to share our 9 month adventure around Europe and the USA with friends and family in 2014. On returning to NZ in January 2015 I decided to carry it on so I could continue to share any future travel adventures - it has become my electronic travel diary. I hope you enjoy and get inspired to visit some of the wonderful places we have visited.
View all posts by SUNGRL →
This entry was posted in Iowa, United States of America and tagged iowaopen, nickvokegolf. Bookmark the permalink.