Nick flew back to the USA in late March to play in the PGA Tour Canada Qualifying School.

PGA Tour Canada is a men’s professional golf tour headquartered in Oakville, Ontario. It was formally started in 1970 and was initially known as the Peter Jackson Tour, and became the Canadian Professional Golf Tour in 1986. The U.S. PGA Tour took over operation of the tour on the 1st November 2012, at which time it was renamed PGA Tour Canada. Historically, it has been commonly known as the Canadian Tour.

In 2015, Mackenzie Investments became the tour’s umbrella sponsor. For the next six years the tour will be named the Mackenzie Tour – PGA Canada.

There are five qualifying tournaments for this tour – four are held in the USA and one in Canada in March and April. Nick played in the one held at the Wigwam Golf Resort – Gold Course in Phoenix, Arizona.

The qualifying tournaments consist of four rounds with no cut. The winner gets full exemption to play on the PGA Tour Canada for the next year. Those in the top sixteen get an exemption through the first four events. A reshuffle then occurs based on how well they have been playing. Those in the top forty are conditionally exempt meaning they may get some starts in tour events depending on the tournament and the numbers.

Despite a committed effort in all four rounds, Nick unfortunately came up short. He finished on four over and in a tie for fifty. The winner, Michael McGowan won in a play off and finished at eight under.

Unfortunately, I didn’t quite have my best stuff for the Canadian Q-School and have missed my opportunity to earn status for the upcoming summer. It was just one of those weeks; a little off with the ball striking, a cold putter and some poor decisions at critical times. The golf course was fair and scorable with generous fairways and pure greens. Devin and I battled hard to try and plot our way around with the game that we had but unfortunately the golf course had other plans for us – thats just the way it goes sometimes. I shot 4 over par and the cut to earn guaranteed starts on tour was 3 under par. Bugger!

In my time playing golf, I’ve come to understand that the journey towards great golf is more of a marathon than a sprint. Its about accepting the innate difficulty of the game and that performance will not always be perfect. That is also the beauty of the game – you are constantly learning and striving to get better. Good weeks will happen and so will bad. The key is to learn from the bad weeks, adjust the plan accordingly and use the adversity to fuel the fire.

I’ve had a tremendous start to my professional career and last week was simply a little blip in an otherwise upward trending process. I am using the next couple of weeks to relocate back to Iowa State. I see this as the best place for my development with the upcoming warmer climate, support team and the facility and resources that I available to me in Ames.

Looking forward, there are some local events to compete in but nothing really serious until the Australasian tour goes to Fiji for the Fiji International in August. I am working hard to secure playing opportunities elsewhere and have a few options that I am looking into.

I look forward to keeping you posted over the Northern Hemisphere summer as my plans unfold. Follow me on Facebook – Nick Voke Golf

The Wigwam Golf Resort has three world class courses – Gold, Blue and Red. The Gold Course was designed by Robert Trent Jones Senior. It is rugged and mature with abundant sand traps and narrow fairways leading to small, hard greens. The course has been in play since 1965 and has been recognised as one of Arizona’s most challenging and respected golf courses – it is nicknamed “Arizona’s Monster”. 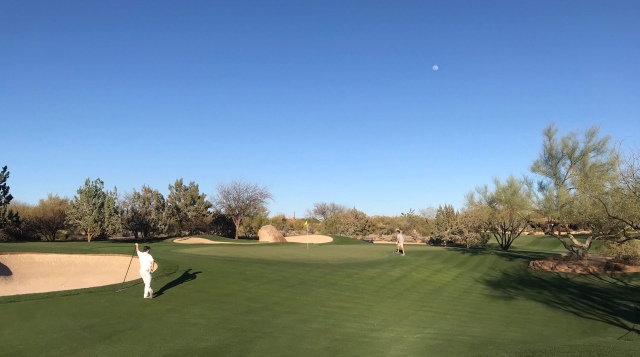 This blog was originally set up to share our 9 month adventure around Europe and the USA with friends and family in 2014. On returning to NZ in January 2015 I decided to carry it on so I could continue to share any future travel adventures - it has become my electronic travel diary. I hope you enjoy and get inspired to visit some of the wonderful places we have visited.
View all posts by SUNGRL →
This entry was posted in Arizona, United States of America and tagged nickvokegolf. Bookmark the permalink.